The most accurate fertility software in the world


You are here: Hormonal Forecaster

The Hormonal Forecaster is a suite a software products that enables users to understand the natural timing of their body. Key features include fertility charting, an ovulation calendar, and statistical analysis of custom defined symptoms. 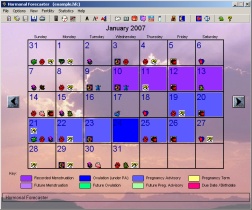 Initially the Hormonal Forecaster was only available for users to download and run on their desktop computers running Microsoft Windows. In the past several years, new releases of the software began targeting Palm OS and Windows Mobile handheld devices such as Palm PDAs, Pocket PCs, and smartphones. The web edition is the most recent release which allows users to manage their fertility completely online in the form of an online charting service.

While the different editions of the Hormonal Forecaster can be used in isolation, one of the most powerful features is the fact that you can use multiple editions and synchronize your data records between them. This even applies to the web edition. By downloading the Hormonal Forecaster desktop version, you can transfer records entered online to your desktop for offline analysis. You can also enter records on your computer and then upload them to the web edition later. This enables women trying to achieve pregnancy or just track their cycles to have access to their data on multiple platforms in multiple formats. 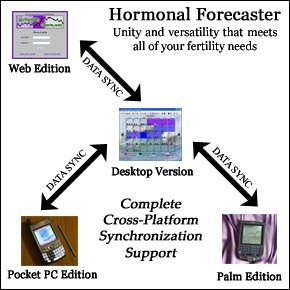 Enter data online or with your handheld device
and synchronize it back to your desktop software.

Whether you choose to start using the online Web Edition now, download the Desktop Version, or try another edition of the Hormonal Forecaster first, you can always return to this site to sign up or download other editions later and merge them with your current data.